An exhibition mounted at the Visitor Centre at the Pitch Lake in La Brea in memory all who toiled in the oil & asphalt industries of Trinidad.

During these times of the Coronavirus pandemic, when schools in Trinidad and Tobago and all over the world are closed, we would like to take visitors, teachers and students on a virtual tour of the  Pitch Lake Museum, which is located at La Brea in Trinidad. It is on the first floor of the visitor facility at the Pitch Lake and it overlooks the lake itself. The facility has an open-air, outdoor character to it, integrating beautiful views of nature with the novelty of the various exhibits.

You can double-click on the images and enlarge them, and download them for the information contained in them. We hope that you will take the virtual tour and get a lot of information about the Pitch Lake, the asphalt industry, and the people and events that shaped it over the years! The text that accompanies the visuals on this blog post will act as your "virtual tour guide".

The Museum was commissioned in two phases. The first phase was opened to the public in March 2009, and the second phase in September 2016 by the Minister of Tourism, the Hon. Shamfa Cudjoe. The content and design was conceptualised by Gérard Besson using images from the Paria Publishing Archives. An important input was provided from Dr. Arie Boomert's archeological research into and books about pre-historic Trinidad. Dr. Boomert was the resident archaeologist at the UWI in the 1980s. The building of the exhibits was done by Mr. Brian Lyons and his team.  Artefacts were collected from various sources, some in the area, and models of the El Dorado figurine and gold coins were made by Alice Besson and Lea Löwe.

The museum has three elements: anthropological/archeological (demonstrating the settlement of the First People from the Orinoco River delta at La Brea in Trinidad), historical (the impact of the myth of El Dorado and the arrival at the Pitch Lake at La Brea of Sir Walter Raleigh, first exporter of Trinidad’s petroleum products), and technological and social (the growth, development and social and financial impact of the Pitch Lake on the society of Trinidad and Tobago).

So let us begin at the beginning, literally, of time, long before humans roamed the islands of Trinidad and Tobago and the Giant Sloth made its prehistoric way through the forested canopy of the jungle that covered the islands.

The Pitch Lake is a symbol of a world that ended and began again. This segment showcases Trinidad and Tobago’s First People. The First People had a creation myth that suggest the origin of the lake, linking the extinction or near-extinction of the hummingbird with the formation of the pitch. This myth, recorded by historian E.L. Joseph in 1837 explains why Trinidad is called “Land of the Hummingbird”.


The Pitch Lake is remembered from ancient times in myths and legends handed down from our island’s Amerindian past. Edward Joseph, who wrote Trinidad's first history in 1837 tell's us of a time before the lake came into existence, when the entire area was covered with the sweetest and most luxurious pineapples imaginable, through which beautiful hummingbirds, variously coloured, flew and displayed their iridescence in the brilliant sunshine.

The story goes on to say that there came a time when strangers from another shore arrived and decimated the hummingbirds, turning their plumage into hats and capes. The Great Spirit of Trinidad rose up and overturned the pineapple field, taking away the strangers forever, and replacing it with a lake of asphalt. The Great Spirit had been angered, for the hummingbirds were no less than the souls of the ancestors of the tribal people long dead, who had returned as hummingbirds.

In fact, the island of Trinidad was known in olden times as “Iere”, Land of the Hummingbird. This motif is remembered today on Trinidad and Tobago’s coat of arms and is displayed on the badges of our protective services.

As you come around the curve, you will be immersed in the life of the First People. 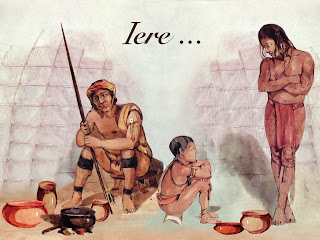 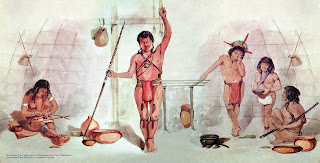 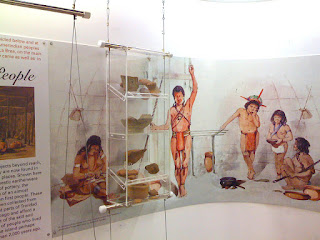 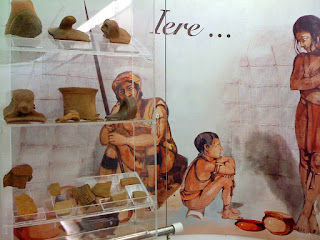 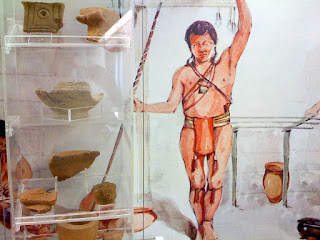 In the 16 century, the era of the First People in Trinidad and Tobago slowly came to an end, as they were decimated by imported diseases, like measles, and the cruelty imposed upon them by the introduction of "civilasition".  From then on, Trinidad and the Pitch Lake at La Brea entered the historically documented era, and we follow events and personalities as they interface with the Lake in the historical section of the exhibit.

To begin, the romantic story of Sir Walter Raleigh is told, how he stopped at the Pitch Lake on his quest for El Dorado, the legendary Golden Man and his city go gold on the South American mainland, to caulk his ship (the “Lion’s Whelp”) with pitch from the Pitch Lake. Raleigh thus became the first “exporter” of a petroleum product from our shores. It is also of significance that Raleigh exported from Tobago the first samples of tobacco, causing that island to be called on the most ancient maps “Tobacco” that would eventually be changed to “Tobago”. Raleigh is also of interest in the sense that he liberated from Spanish chains five caciques or kings of Trinidad, who had been held in captivity at St. Joseph, the ancient capital.

Sir Walter was the first of many famous visitors to the Pitch Lake.  Regarded as a wonder of the world it made its way onto the itineraries of many  visitors to Trinidad. Because of the several depressions on its surface, which are usually filled with water, the area gave the impression of a fresh water lake. This gave rise to this deposit of bitumen being called a lake.

The Cedula for Population of 1783, a Spanish law that invited people to come and develop Trinidad, also meant the introduction of enslaved Africans to the island on a much larger scale than previously. As a result a large number of sugar plantations were established at La Brea and environs adjacent to the Pitch Lake. African people who were not enslaved and Free mixed race people settled in the area as well contributing to the creation of an extensive agricultural economy in the pre-Emancipation period.

After the emancipation of the enslaved in 1838, the British colonial government sought to replace the labour force on the sugar plantations. From 1845 onwards, a large-scale Indian indentureship scheme filled that need. As the industrial revolution gained momentum in Europe, technological advancements led to the growth of the asphalt industry alongside the agricultural sector in the La Brea area.

Part 2: Technological and Social Aspects of the Pitch Lake


The technological properties of pitch are of particular interest when told against the background of the social impact that the substance had. It is recorded that kerosine was invented by a man called Abraham Pineo Gessner in Halifax, Canada, with pitch from the Trinidad Pitch Lake! Lord Dundonald, an Englishman, was one of the early concessioners. Dundonald Street in Port of Spain is named for him. Conrad Frederick Stollmeyer was his local agent. Stollmeyer is remembered in history as the man who introduced the sale of coconuts from carts around the Queen's Park Savannah in Port of Spain in the 1860s.


When Phase 2 of the Museum at the Pitch Lake was built five years after Phase 1 a couple of changes were made to the exhibits in Phase 1 to streamline and harmonise the content better. Since the Museum is in one large room, this re-structuring of Phase 1 gave it a better flow.

For Phase 2, the Museum at La Brea also acquired a number of actual kerosine lamps, stoves and tools of various makes and shapes, which allowed us to restructure the exhibit as follows:

This exhibit outlines the influence of pitch as one of the petrochemical products of Trinidad and Tobago. With the advent of kerosene, street lighting on a very wide scale was introduced to the town of Port of Spain and to the outlying districts and villages, causing a change and upgrade of social life (see images below). Kerosine lighting also altered family life, in the sense that it was introduced in kerosine lamps and stoves, which caused a move away from coal- and wood-burning stoves, this brought an improved standard of living for all, especially the poor. The advent of kerosine altered the quality of life on all levels of the social spectrum and facilitated learning through reading at night. For street lighting kerosine replaced whale oil, which saved the lives of many of the great mammals (the Gulf of Paria was once called the Gulf of Whales). Pitch was also erroneously thought to be a preventative for cholera, which was held to be an air-borne disease. Pitch was burnt at street corners in the towns during the cholera epidemics of the 19th century.

One of the more revolutionary new uses of pitch was, of course, the paving of roadways. Here is how it came about:

As the need for paved roadways increased throughout the world, especially after the invention of the motorcar, pitch from the Pitch Lake in La Brea began to be exported all over the world.

After World War I, when thousands of Trinidadian and Tobagonian men came back from the theatres of war abroad, a new sense of pride and self made itself felt among the population. With the development of the oil sector subsequent to the growth in demand for petroleum-based products, the labour movement became more organised and more militant. Between 1917 and culminating with strikes and armed confrontation in 1937, the labour movement harnessed many stalwart personalities that set about changing conditions for workers not only in oil, but also in the sugar industry. This panel at La Brea commemorates and honours this development. It also honours the police officers, Major Power, Inspector Bradburn and Corporal Carl, "Charlie" King, who were killed in the line of duty on 19th June, 1937 during a strike in the oil belt.

This brings us to an end of the tour of the Pitch Lake Museum at La Brea! It was lovely having you and we hope you enjoyed to see and read about the Pitch Lake and its environs from pre-historic times to the early 20th century.

We now invite you to check out "The History of Oil", written by Gérard A. Besson and published by First Magazine, at the following links:


Click here to visit the Virtual Museum of the Sugar Industry at Brechin Castle, Couva

Click here to visit the Virtual Museum of Port of Spain

Thank you and come again! And in the meantime. don't forget to book your tour guide and visit the actual Pitch Lake itself, which truly is a Wonder of the World!

Posted by Gerard A. Besson - Caribbean Historian at 4:19 pm

Great Job. I recommend you add a drone tour of the lake facility to the virtual museum.

Amazing history and stories. I never heard about some of these stories before. Thank you!

Hello i am conducting research on this historical site for a UTT project and i would love to know the exact date if possible of the establishment of the La Brea Pitch Lake Museum.