This exhibition, mounted at Fort San Andres in Port of Spain, is dedicated to the memory of John Newel Lewis, architect and artist who devoted himself to the recording and illustrating of the 19th century buildings of the city.


During these times of the Coronavirus pandemic, when schools in Trinidad and Tobago and all over the world are closed, we would like to take teachers and students on a virtual tour of the Museum of the City of Port of Spain, which was located at Fort San Andres and is currently (as has been for a while) closed to the public.

You can double-click on the images and enlarge them, and download them for the information contained in them. We hope that you will take the virtual tour and get a lot of information about our capital, our home city, the city of our ancestors! The text that accompanies the visuals on this blog post will act as your "virtual tour guide". 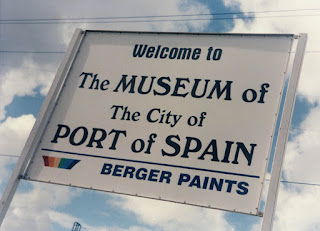 The Museum was commissioned by the Ministry of Culture and Tourism in 2003, and opened by then  Minister of Culture the Honourable Pennelope Beckles and Mayor of Port of Spain, His Worship Murchison Brown. It is dedicated to the memory of architect John Newel Lewis HBM, who made himself deserved by his involvement in the carnival arts and the documentation of the architectural influences of Port of Spain. The National Museum led by then curator Vel Lewis oversaw the project. The content and design was conceptualised by Gérard A. Besson HBM, D.Litt (h.c.), using images from the Paria Publishing Archives. The three-dimensional objects in the display cases were drawn from the collection of the National Museum. Some were sourced with the kind assistance of Ross Bynoe of Yesteryear Antiques. We also received spontaneous donations by from a wide cross section of people for the exhibits. The building of the exhibits was done by Peter Sorzano of Signs & Designs Ltd. and his team, with contributions from Peter Tardieu.

So let's take the tour of the Museum of the City of Port of Spain!

We first show you the entrance of the Museum, a long corridor with a window in it that allows you to get a first glance into the exhibition itself. "History is a window! A window into our past that offers a view of the future."


Turning the corner, you are finding yourself in a pleasant atmosphere. The high ceilings and tall windows of the Museum let in light and air, and the hardwood floor gleams with shafts of light. The large, colourful panels hang suspended from the ceiling on invisible wires, and allow you to walk around them and discover what's on the obverse and reverse of them. Many exhibition boxes of three-dimensional, historical objects and curiosities add to an overall atmosphere of being in a place where history was made.

The display box of cultural artefacts of the First People shows pre-Columbian pottery shards, a stone tool, and a woven basket. Did you know that the First People had developed a weaving technique that allowed them to even carry water in a basket?

2: European planters,  Free Blacks & People of Colour, the majority of whom were French speaking, start arriving in Spanish Trinidad from 1783.


Port of Spain, or as it was then called "Puerto de España", was really just a small hamlet in the mangrove-rimmed mud flats at the river mouth of the Rio Santa Ana in those days. However, the influx of hundreds of people from the French Antilles, be they white, free black, or people of colour, who brought a large quantity of enslaved African people to clear the jungle and establish plantations, opened up the plantation economy in Trinidad and Port of Spain grew swiftly to become a busy port town.


In 1797, Trinidad was conquered by the British, eventually becoming a Crown Colony. The influence of Great Britain shaped the modern history of Port of Spain. This section of the Museum explores some of the historical personalities and milestones of the transition from Spanish to British Trinidad—during which for many decades the population continued to speak French and Patois and where Spanish Laws continued to exist  in a British colony up to 1849!

Part 4: Port of Spain's Architecture in the early 19th century


If you want to read the text on the panels, double-click on the image!


As you continue your tour of the Museum of the City of Port of Spain, you now enter into the second room of the exhibit. This room is dedicated to the modernisation of the town in the 19th and into the 20th century. With the growth of the plantation system after the emancipation of the enslaved under the British colonial government, the city of Port of Spain grew and its commercial and administrative institutions developed at a rapid rate: the banking system, the insurance industry, the Town Council, the transport system, the Police and judicial systems, and several other institutions came into being.


One of the very interesting panels in the exhibit is the one about the past mayors of the City of Port of Spain. You will recognise many familiar names, since several streets in the city and environs were named in their honour.

Carnival is definitely a Port of Spain affair! Here is the cradle of the steelband, here people invented calypso and sang "Fire Brigade Water the Road", here sailor mas was first modelled in the 1920s after the sailors of the American Great White fleet, here is where moko jumbles stalk the sidewalks at Carnival, where blue devils and pierrot grenades jump about, and where the Beast once bristled its scales and couldn't get wet stepping over water running in a canal. 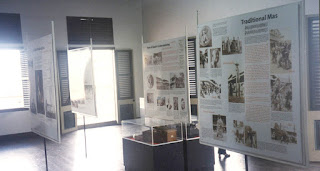 Well, this excursion into Carnival in Port of Spain brings us to an end of the stroll through the Virtual Museum of the City of Port of Spain! Didn't you feel that it was like walking around the pages of a very large picture book?
To re-cap, let's provide you with some time lines, which may also assist you in writing papers, doing further research, or looking up the correct dates for various historical events (remember to just double-click on them to enlarge and read):

Please visit our other virtual museums by clicking on the links below:

Virtual Museum of the Sugar Industry in Trinidad and Tobago

Virtual Museum of the Pitch Lake at La Brea