Roume's last moments – A fictionalized version of the death of Roume de St. Laurent, containing factual elements of his life. 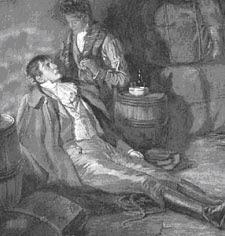 His breath came in small, rapid gasps. His once sweetly handsome face now decimated by pain. Sunken cheeks, his lips propped up from beneath by teeth grown large from the shrinking of their foundations. Wisps of consciousness floated in and out like cobweb gently blowing in a shaft of sunlight, sometimes visible, sometimes not. Anchoring memories that had not entirely lost their flavour. He tried not to let the phlegm rattle in his throat, as he knew that that would make her feel that he was going. He was going. He braced himself, assuming in his mind a more dignified way of lying, and tilted up his chin, glancing along his cheek towards where his official uniform was thrown across the back of a chaise longue. Gold brocade, handsome with the dark blue twill, the hilt of his ceremonial sword bringing a regality to it. The emperor's golden eagle shimmered, his eyes were moist. He thought to raise his hand to wipe away a tear. He decided not to, as it would alarm her. The cobwebs of his mind floated upwards and shimmered in the sunlight of recollection.

He saw himself and her and the child boarding the frigate Isle de France, 84 guns, at the dock at Port-au-Prince. They had said good-bye to Toussaint, whom he knew was the only person capable of keeping Haiti for France, if treated well, with reason and intelligence. Before he left, he had written a letter to Napoleon, advising against an expedition. It was ignored.

It was aboard the Isle de France that the first signs of illness had occurred, had occurred to him. A wrenching pain, so sharp, so surprising in its intensity that it made him crouch and grab the gunwale for support as the ship settled in the bosom of a long Atlantic roller to rise up, her bow breaking free. His face was cold with sweat. New York was behind them, France ahead. He had been 22 when he first went to France, a place strange, yet familiar. He loved it, cushioned it with inherited memories, bathed with day dreams, dreamt while lying on the white sand at Grand Anse, the sky just a shade lighter than the sea. St. George's, a medieval skyline in miniature. This land of his forefathers. He was at home in Paris, his father's House on the Rue de la Concorde was modest. They used it in the way that people used townhouses when they really lived in the country or on islands. He was rich. They were well connected. He met a girl in an enchanted circle of gaiety, charm and Mozart. Her name was Francis Wilhelmine. She was the daughter of Sir John Lambert Bart. and his wife Anne Holmes. They married in 1765 and returned to Grenada to a house newly built on a knoll, overlooking great beauty in the parish of Grand Pauvre, where their daughter Elizabeth was born in 1766 and where other babies were born only to die, tiny things to be buried quickly beneath the huge eucalyptus trees, inaugurating the family's graveyard on the estate.

His wife and daughter travelled with him to Trinidad in 1777, after his father's death. His mother had remarried a dandy, a sailor with a lean on a title, just a few months older than he. His adventures into finance had produced reversals. He now adventured to the nearby Spanish island, hardly populated, rich in potential. He would become its colonist with the inauguration of a celebrated cedula. He would become so many things. His marriage to Francis Wilhelmine not so much failed as it withered. His mother thought her extravagant. He knew she was faithless. 22 years later, when she was living in Trinidad, by then a British colony, he cited in his divorce petition in Haiti her liaisons with "two retired lifeguardsmen among others...". By then, his politics had changed; gone was his royalist past. Now he was republican, soon to be imperialist. "She openly professed the most extreme and anti-revolutionary principles. She only associates with the enemies of the French people...". Port of Spain, in spite of being British, was populated by many royalists and noble Frenchmen.

The vision fled, as the opiate faded and the pain returned. He awoke before dawn. She had climbed into bed with him for the warmth. There was almost no money. His daughter died at age 20, in 1786, during his Tobago years when he had served with Arthur Dillon. He as Ordinateur, Count Dillon as governor. He reported directly to the Marechal de Castries. The Parisian street sounds rose up with the melting mists, shouts and whistles. Bells chiming, the thump of a broom on a carpet, the clatter and rattle of horse-drawn traffic. She stirred. He realised that the little one was between them, Rosette, named in memory of his mother, Rose de Gannes, the Marquise de Charras, the Chatelaine of Champs Elysées on the island of Trinidad. His own plantation at Diego Martin. His first wife's estate at Ariapita just west of the town. Such a long, long way away from home. What home? Home in Grenada? Home in Haiti? Home in Tobago? Home in Tobago. He dreamt he had closed his eyes. He saw her plainly, dressed in white, in someone else's clothes, in the style of the previous century. She appeared to be in costume. He had almost laughed out loud. Dillon's glance contained him. A long-legged quadroon, auburn hair, bright blue eyes, her skin the colour of dark honey, young, 16, high-breasted, big-bottomed, her toes splayed apart from walking barefooted all her young life, strode past them without a glance in the market at Port Louis, now called Scarborough.

He made inquiries. She had been born in Grenada, her name Marianne Elizabeth Rochard, the natural daughter of Thomas Daniel Rochard Lepine and of Genevieve Katronice. That night, he and Dillon in court dress paced the front gallery of Government House in anticipation of the arrival of the Marechal. He saw her passing through the garden in the company of a group of young girls, who were ogling the officers as they sat smoking or playing at whist in the gallery. A carriage turned into the drive, two young slaves with torches ran before it, the girls had run away. Not her. The brilliance illuminated her features, enflamed them, he noticed her slightly flaring nostrils, he thought them endearing.

The officers rose to attention. The governor descended to greet the Marechal. Their eyes remained locked as significant events started to unfold. They became lovers at that moment and remained so for the rest of their lives. A daughter was born to them in Scarborough on the 6th July, 1788. Many years later, while acting French agent and commissioner in Spanish Santo Domingo, in a ceremony in Port Republicain, now Port au Prince, in 1799, in the presence of Toussaint L'Ouverture, the Divisional General commanding forces in French St. Domingue, Louis Beauvais, Christophe Mornet and Paul L'Ouverture, he divorced Fanny Lambert and married Mlle. Rochard, legitimising their daughter. He was 56 and she 38.

The Spanish crown had granted a Cedula of Population, through his endeavour. This created modern Trinidad. The French crown had appointed him Ordinateur of Tobago, where he and Arthur Count Dillon had been so successful in carrying out the objectives set them by the French government. Under orders from Napoleon Bonaparte, he went to Haiti, then the most valuable colony in the world, providing about two thirds of the overseas trade of France, which had risen in revolt, overthrown its government and defeated the armies sent to subdue it.

He was dispatched to exercise his talents with its leadership to win it back. He gained the friendship and the trust of the island's liberator, Toussaint L'Ouverture. He administered the Spanish half of the island, power passed between his hands, battles unrecorded were fought, won, lost, whatever.

Haiti was a genie that would never return to its bottle. General Leclerc, the emperor's brother-in-law, came with an army in 1803. This ended in complete defeat, Leclerc's death and final victory for the Blacks. Napoleon walked away from the western hemisphere. He even sold Louisiana to the newly made Republic of the United States. The great days of the French were over in the west. Roume's outstanding career was now over, too. The emperor had granted him a pension of 3,500 francs a year on 18 Germinal, an. XI (or 8th April, 1803). This ceased on his death that day in Paris, as he lay in the arms of Marianne; his daughter asleep beside them.

She had great difficulty in obtaining a pittance for herself and the child. She made several appeals to the Navy Ministry. At one point, Napoleon was reminded "Your majesty has refused this application because this woman is coloured". The note however continued "but she dies from hunger and a pension of 400 or 500 francs is recommended". Napoleon ordered that a pension of 600 francs a year be paid to her from the Naval Pensioners' Fund. He initialled the decree himself. Philippe Rose Roume de St. Laurent is hardly remembered by history.
Posted by Gerard A. Besson - Caribbean Historian at 2:14 pm