Spreading the Love of History

It’s not easy being a historian in T&T. Jerry Besson has been chronicling the history of the country as a publisher and writer for more than three decades. This is tough enough but it becomes even more so because of the attitude many citizens have towards the task. “The most significant challenge has been the institutionalised indifference to the maintenance of the history of the island,” Besson said of his experience over the years. “If you were to go to the Registrar General’s office tomorrow morning and try to find out anything about your great-grandmother, you think it easy?” he said. “It’s one of the most difficult things in the world for you to be able to do, because of the disintegration and the bad keeping of those historical records.”

Besson, 71, persists in spite of the obstacles. His Paria Publishing, founded in 1981, prints his books and the books of other history stalwarts like Michael Anthony and Fr Anthony de Verteuil. Last month, he released his third historical novel, From the Gates of Aksum, a mystical adventure saga spanning the 18th and 19th centuries. He was scheduled to read from it yesterday at an Evening of Tea and Readings at Paper Based, a bookshop in The Normandie Hotel in St Ann’s which specialises in Caribbean literature. “He did a lot of important books,” said Paper Based owner Joan Dayal, talking about Besson’s contribution to Caribbean literature. “He’s one of the very few publishers in Trinidad. He also supplies a lot of information to people who are writing. He’s a wealth of information. And he’s a great storyteller, too.” From the Gates of Aksum is the third in a series of historical novels Besson said he plans to continue. “It’s important to do historical fiction, because many people cannot take on the weighty proposition of reading academic history,” he said. “so it is sometimes easier to take the historical narrative and romanticise it by arranging it in terms of action and adventure. It makes it more accessible.”

He added, tongue-in-cheek: “But you have to make sure you get your facts right, otherwise Bridget Brereton would point you out.” Brereton is a history professor and newspaper columnist with whom Besson collaborated on the popular Book of Trinidad. She has given Aksum a thumbs up, writing in a review that it was “definitely a book to get hold of.” Despite the obstacles, Besson—who has also established a number of museums, including the police museum and the City-of-Port of Spain Museum—calls what he does gratifying. While still too many people don’t appreciate it, enough do to keep him motivated. He describes being greeted with awe by the young workers at the National Library, who apparently assumed his books were written closer to the periods they were set in. “They said: ‘You is Jerry Besson? We thought you was dead!’” he recalled with a laugh. Besson is hoping to reach even more people and share with them his enthusiasm for local history. It’s important for reasons other than the enjoyment it can bring. “Trinidad has a very interesting, very compelling history,” he said. “And if people knew it more they would understand the social processes and the political processes that they’re going through.” 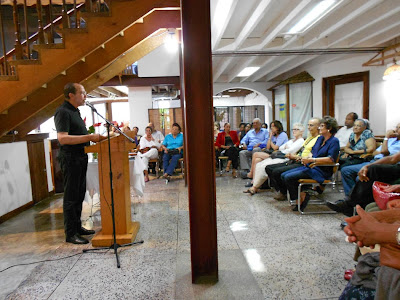 Gérard Besson doing a book reading from his latest historical novel, "From the Gates of Aksum", at Paper Based on 19 October 2013
Posted by Gerard A. Besson - Caribbean Historian at 12:41 pm